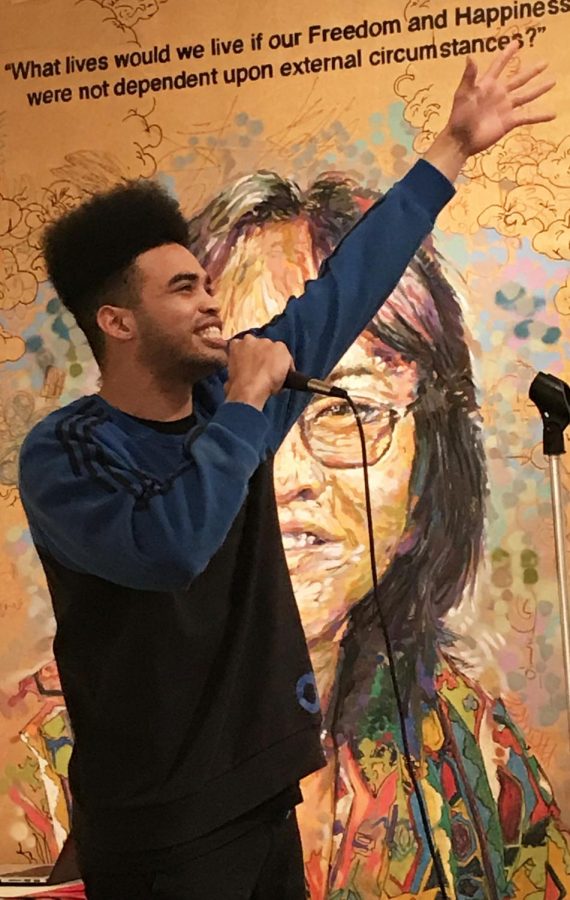 Tyrone Powell, known as MC Black Jesus, extends himself to the crowd at the Feb.1 First Thursday open mic in the Euphrat Museum.

Can Black Jesus get an amen? At the First Thursday open mic hosted by the 4 Elements of Hip Hop club Feb. 1, the answer was “Yes.”

“This is the shark tank; only the strongest survive,” he intoned. “And I thank everyone who’s kept me alive. We is more than just a city; we roll as a clan; we got people from Africa to Pakistan. SJ diversified just open your eyes; we gotta stand together to keep minorities alive.”

Powell said this song was conscious rap, but he stressed the importance of exciting delivery for any lyrics.

Performing the rock song “Believe” by Yellowcard, club co-president Jacob Dena, 22, photography major, introduced himself and told a room full of people, “No matter how hard life’s hitting you, get up and try again.”

One sign-up wanted to play a song on violin accompanied by a backtrack, but his hands started to shake. The audience encouraged him, but he took the microphone in hand and laughed off the stage fright. His spotlight continued, and he could comfortably rap.

“People have stage fright, we’ve seen that today; the more they try the better they’ll get.” said participant Dena Laforet. “We accept anything: comedy, cover songs, spoken word. We don’t criticize … everybody is good coming from the heart.”

McTate Stroman, who works as a program coordinator for occupational technology at De Anza, is emcee of the monthly open mic events.

He rapped and also performed a poem about his sister called “An Image of Strength.” He explained she hasn’t spoken in over 30 years since her heart briefly stopped, causing brain damage affected with encephalitis doctors had misdiagnosed.

“You are an image of strength laced with femininity,” he read. “Your focus of reality moves me to be the potential me you see … So much I owe to you, it’s true, even as a little man you taught me how to stand on my own two.”

Stroman said his sister makes him want to perform, use his voice and create a platform for others.