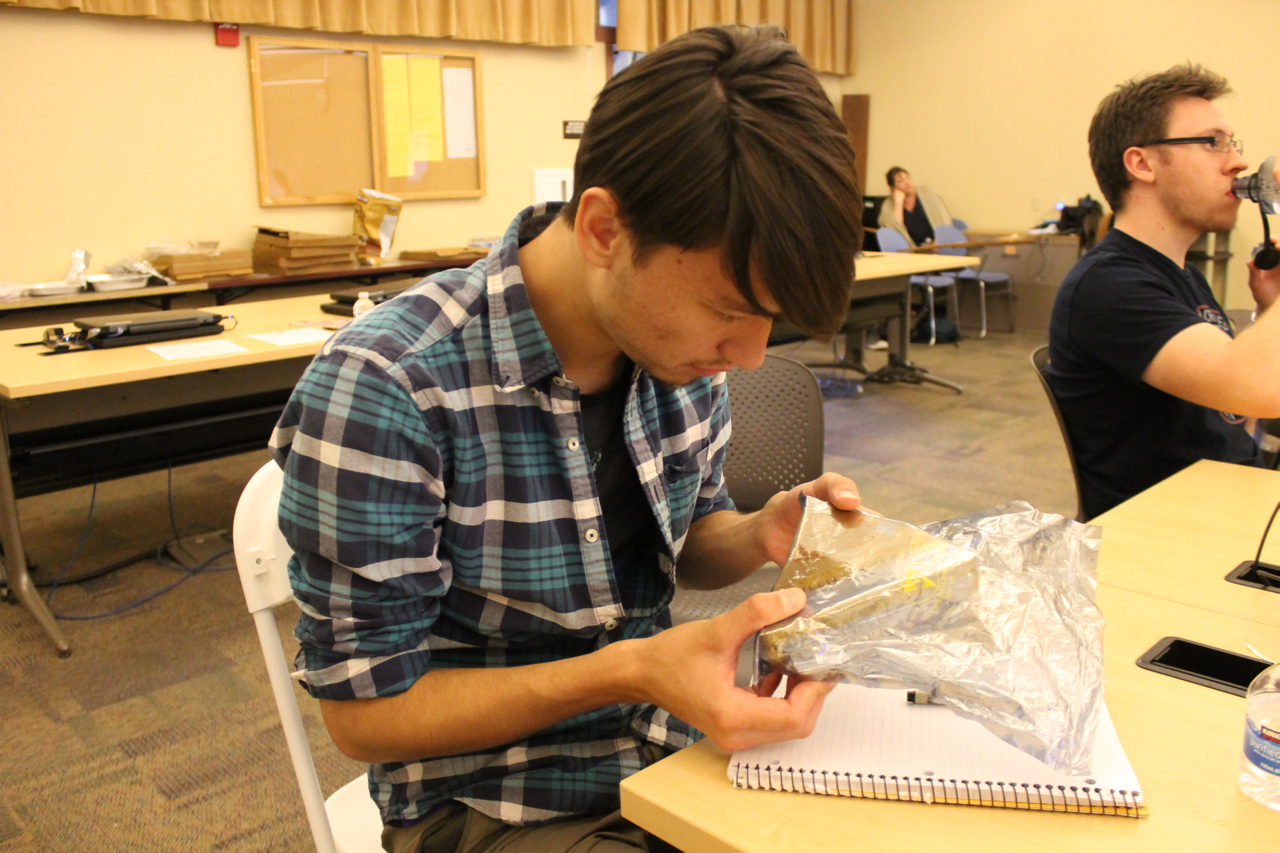 Sean Hinson, 22, plant biology major, inspects a piece of radio telescope at the Leaps and Bounds on May 25.

A NASA aerospace engineer told the story of how he got a 66 percent on a math test because he switched a negative and positive sign on the last page of the last problem, and how despite those kinds of obstacles getting him down, he kept moving forward, at the Leaps and Bounds physics conference hosted by the Physics Club.

“You encounter things like those. Something like that brought me down for that week or that month,” speaker Eddie Uribe said. “Like how did this happen? I worked really hard and it still didn’t work out. But you just kinda … keep going.”

Speaker Nathan Whitehorn said he planned three presentations, and let students vote on which one they wanted to hear the most. His talk on the history of the universe won out. Whitehorn also handed out a piece of a radio telescope sealed in a silver bag.

Co-president of Physics Club Aysha Rehman, 19, aerospace engineering said co-president Mikayla Ehershmann-Singh initially had the idea to bring speakers. Rehman built on the idea and said, “Why not a conference?”

The club started planning in February, with a majority of the planning happening a month and a half before the event. “We were just getting speakers and reaching out to whoever we could,” Rehman said.

The club coordinated closely with Director of STEM Success Program Yvette Campbell, who helped getting a location, distributing flyers and letting STEM professors inform their students.

“I was really nervous at first, because not a whole lot of kids were coming, so I thought, ‘oh my god, this is a disaster,’” she said.

After the first speaker, Rehman said students started pouring in, and everything went smoothy. “Our nerves kind of settled down and we were getting more comfortable with the crowd.”

One attendee came to support their niece, Ehershmann-Singh. “I was actually really impressed that De Anza was pulling something like this together,” Autumn Ehreshmann said.

Dominic Mutimer, 22, mechanical engineering major, said he attended the event after hearing about it from his professor. “All of this stuff is relevant [to my major],” he said. “I can get a perspective from the industry.

Kentaro Tanaka, 21, electrical engineering major, received extra credit for attending the event. “It’s [a] really good event to get some knowledge and information.”

“It’s the first time we’ve ever heard of any Physics Club doing this,” Rehman said. “We definitely plan on having another one next year.”