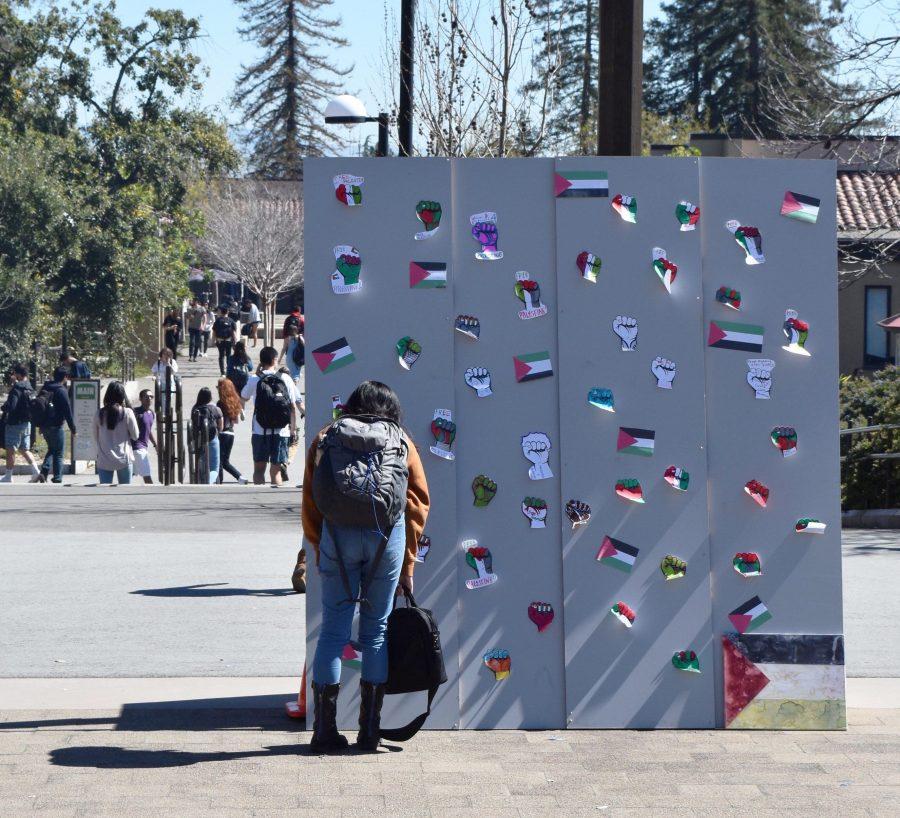 The Muslim Student Association created a representation of the physical barrier put in place to separate the Palestinians from the Israelis in hopes that students will spend a brief moment to stop and think about the conflict in the Middle East.

Inan Molla, 20, linguistics major, said they wanted to make the representation as realistic as possible, so they painted 10 feet tall, wooden panels gray.

MSA gave students the opportunity to color in fists and put them up on the wall, inspired by the actual wall, which had a lot of graffiti, paintings and art. Many fists hung up on the representation read “Free Palestine.”

Molla came up with the idea. “We get the mainstream information of what’s going on there, and not really the different perspectives.”

MSA vice president Anisa Chaudhry, 18, psychology major, said MSA had been focusing on current issues, so they wanted to highlight people who have been fighting for all of their lives because that’s all they’ve been exposed to, while being silenced by the media.

Molla said if you visit the wall, it’s as if Israel and Palestine are two completely different worlds. “Israel is like a luxurious place, and you have Palestine, which is like rubble, because every time there’s a war or conflict, it’s just destroyed over and over again.”

A poster was put up that gave perspectives from Israel, against Palestine. “It’s good to see both sides. It probably did anger some people but that’s the goal too, for people to have a reaction,” Molla said.

Melissa Epps, 22, sociology and languages major, took a moment to spectate the wall. She said the wall was a great way to engage people who might not know about issues outside of their life.

“I would love to see more of that kind of work on campus, and have it also be embraced,” Epps said.

Chaudhry said she personally wanted MSA to serve as a place to go to be with people who understand you without an explanation as to why you’re upset or scared.

he commented under the photo.

Custodian Marivic Budrick said De Anza needs another plumbers, as three are leaving the job, and another plumber is necessary to fulfill the volume of fix orders.

Custodian Ana Ferreira cleans the bathroom next to the student body chambers. She said three sinks she requested to have fixed are still broken, even though two of the requests date back to September.

“They get mad when we request two or three times,” Ferreira said.

The bag of pee afixed around the A quad urinal was removed on March 9. PHOTO COURTESTY OF JULIAN LAPLACA’S FACEBOOK