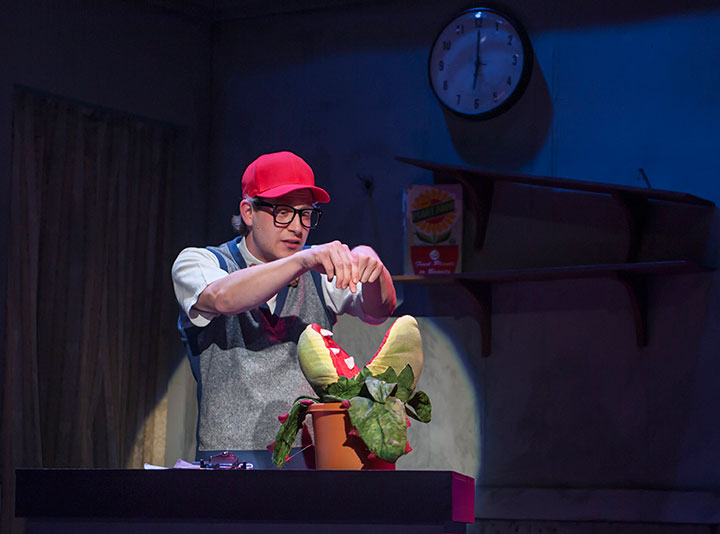 “Little Shop of Horrors” was first released in 1960 as a low-budget, comedy-horror film by Roger Corman.

It was later adapted for the stage by the award-winning duo, Howard Ashman and Alan Menken.

The musical version of “Little Shop of Horrors” had a smaller cast, a simplified storyline and plenty of humor.

Foothill’s production of “Little Shop of Horrors” tells the story of Seymour, an impoverished floral assistant on skid row whose life is dangerously changed when he discovers an exotic plant with a carnivorous craving.

The melodious plant, called Audrey II, enthralls Seymour with fame and fortune in exchange for satisfying its ravenous appetite for human blood.

The show had numerous strengths, but it was the actors and the development of their characters that made the show so enjoyable to watch.

Orin Scrivello, played by Jeff Clarke, was one of the audience’s favorite characters.

Scrivello is a twisted dentist and the abusive boyfriend of another character, Audrey.

Scrivello is described as a “sadistic creep” who is a “disgrace to the dental profession.”

He inhales large amounts of laughing gas while torturing his patients with antique dental instruments.

Clark’s version of Scrivello was almost identical to Steve Martin’s performance in the 1986 movie musical adaptation directed by Frank Oz.

Like Martin, Clarke played Scrivello with the right balance of humor and eccentricity, which made this character hard to hate and hard to forget.

Another crowd favorite was the sassy Greek Chorus with Crystal, Chiffon and Ronette. The parts were played by Lyn Mehe’ula, Melissa Baxter and Megan Coomans, respectively.

The ever-present ladies entertained the audience with their quick wit, attitude and hilarious commentary.

We can’t forget Audrey II, because without “Twoey,” there would be no show. James Devreaux Lewis voiced the character and it was operated by David Kirk and Erik Scilley.

Audrey II’s operation coincided with its dialogue and musical numbers  so perfectly that it was hard to remember that Audrey II was just an oversized, embellished prop.

Foothill Music Theatre’s “Little Shop of Horrors” is a high-quality performance because the set and costumes are both reminiscent of the 1960s.

The production included precise choreography and uses a small space to stage musical numbers such as “Skid Row,” “Dentist!” and “Feed Me.”

The entire cast and crew put on an outstanding performance of this cult classic.

The only downside of “Little Shop of Horrors” would be missing it.