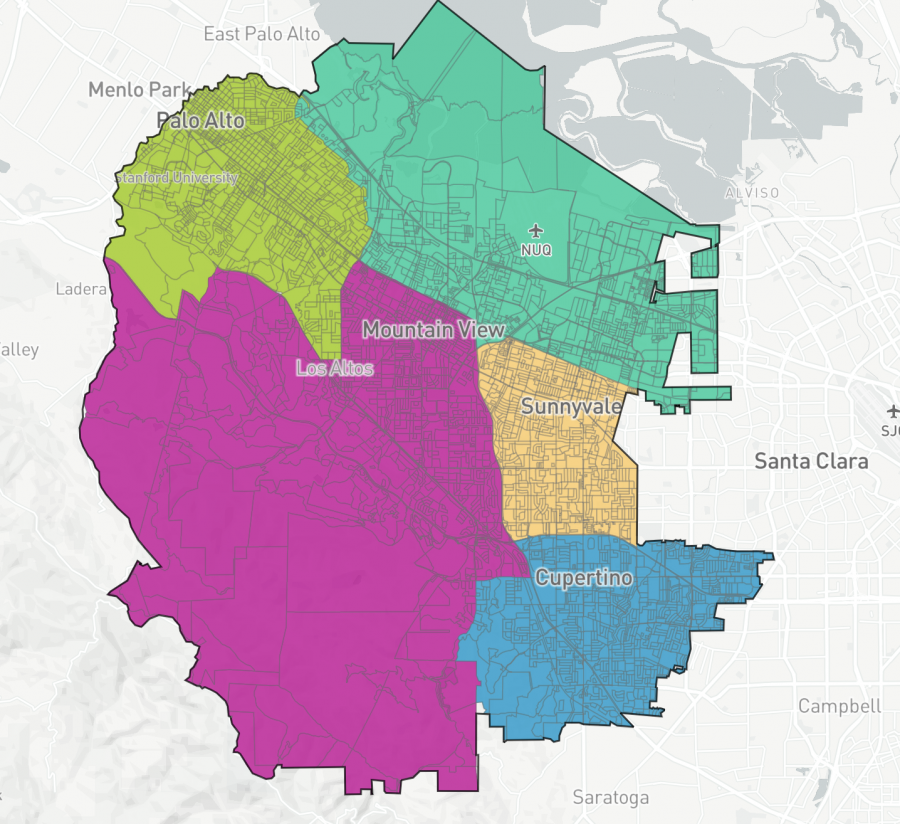 Sample Drawing of the Foothill-De Anza Community College District area map as done on "DistrictR," the software "Redistricting Partners" has configured for the district. Community members can use the site to submit their own maps to the Board.

As it goes with politics, we are told that elected representatives are supposed to serve us, their constituents. Yet, when the time comes for us to convey our wants and needs, our voices are often not loud enough.

A massive change is about to descend on the Foothill-De Anza Community College District and the window for students to voice their concerns is rapidly closing.

For the first time in 65 years, the district is supposed to, with the community, draw five new distinct areas and ratify a new map that will determine who gets to lead and govern the schools. The last chance for students to have a say in what that map looks like is Jan.10.

Why does this matter to you, the student? For starters, it’s about accountability. The five-person board oversees the hiring and evaluation of the chancellor, who in turn, oversees both school presidents. These leaders get to define what a thriving school looks and feels like, eventually deciding on concrete things that actually affect everyones’ livelihood such as the budget.

Understanding this will lead one on a path of natural questions: How do you know if what they’re doing actually lines up with your needs and goals as a student, especially in the rapidly changing world of the pandemic? Who has a seat at the table? Is it inclusive or is it composed of established insiders?

All of this isn’t to say that the current leadership hasn’t lived up to those ideals, but it is very much what is on the table with the upcoming redistricting.

A new map will guarantee that elected members will represent five distinct areas and constituencies. Before then and often by chance, multiple members had been concentrated in specific areas.

“Ten years ago, we had three trustees from Palo Alto and nobody from Cupertino; now it’s the other way around,” Vice President and Trustee Laura Casas said. “At least this new plan will ensure equal representation.”

She has been serving on the board since 2005.

“If you’re elected by a certain population, you might be a little closed minded and forget to look at the broader picture,” Casas added. “By the same token, if the rest of the trustees don’t represent the same population as you, they’re not going to vote on issues that are important to you.”

“Hopefully in this process, the board will become more inclusive.”

On Dec.13, 2021, the board voted to advance two draft maps that they favored: one drawn along existing city lines and the other along underlying school district lines.

Community input has been sparse, but it wasn’t as if the door hadn’t been open. The board has actually been openly working on this with a third party consultant since 2019.

You do not have to live in the district area — which includes Palo Alto, Mountain View, Los Altos, Sunnyvale, Cupertino and small portions of San Jose, Santa Clara and Saratoga — to make your voice heard. As we all know, many students and staff come in from outside of the district from neighboring cities.

Even if you don’t get to vote on the elected members when time comes, you, the student, are still their constituents. There are pros and cons to both draft maps in contention and you should think about which one would represent you the best.

The public can submit comments and concerns to [email protected] or attend the meeting on Jan.10 which is scheduled for 7 p.m.

The district office and meeting chamber is located at Foothill College in Staff Lot 7 near the fire station.